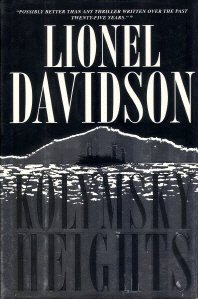 I’ve decided to re-read a few of my favourite books. When I read it in the 1990s I thought that Kolymsky Heights was one of the best adventure thrillers I’d ever read.

A captive scientist in a secret research station deep in Siberia smuggles a message to an Oxford professor he knew earlier in his life. The CIA send Jimmy Porter into the post-Soviet wilderness to infiltrate the station. Porter is a Canadian-Indian (now more wokely called a “native Canadian”), a gifted linguist and survival expert. Getting him into Siberia in the guise of an “indigenous Russian” takes up two thirds of the narrative. What’s going on at the secret establishment has echoes of the X-Files. Getting him out with this world-changing secret is another challenge.

Lionel Davidson vividly recreates the Siberian permafrost and the people who live there (it’s where gold and other minerals are mined in huge quantities). This is a story like no other, bone-chilling in its setting and nerve-shredding in its tension. After twenty-five years I still rate it in my all-time top ten thrillers – maybe in my top five.

Posted in DavidGeeBlog | No Comments »

« David at the Movies: Upstairs, Downstairs and on the Riviera
What I’m reading: John Le Carre’s last novel »